This is the ultimate guide to creating a Pepper’s Ghost effect in 2020.

In this new guide, I’ll show you how to create a professional illusion that can be used in theater productions, museums, haunted houses, and amusement parks.

Here’s a comprehensive breakdown of the main points we’ll cover:

What is Pepper’s Ghost?

The earliest known reports that mention the using ethereal images dates back to the 16th Century. Neapolitan scientist and scholar Giambattista della Porta is known to have mentioned this effect in his his 1584 book known as Magia Naturalis (Natural Magic).
Some of the topics covered in his book focus on geology, optics and invisible writing. In total, there are 20 versions of the book, thanks to so many alterations and additions to the writing. This is the first place to hint at the concept of what would become Pepper’s Ghost.
You can read samples of this work on web.archive.org or the Library of Congress website.
After Porta came Henry Dircks, who was the first man to lead the way in bringing Pepper’s Ghost to life. Dircks’ found inspiration in old Italian optical illusions using glass and light. His interest lead him to his Dircksian Phantasmagoria, based on phantasmagoria performances during that time.

Referred to as “horror theaters”, these performances used magic lanterns and projections to show frightful projections on stage. Dircks’ invention proposed a new method to projecting these images. His goal was to sell his concept to theaters in the area, but many rejected the new concept. To use Dircks’ idea, theaters would have to be completely redesigned, a costly and complicated method many did not want to undertake. This fact kept theater owners uninterested in changing their current setup.

John Henry Porter came next in our lineup of inventors. He was a chemist and professor at the Royal Polytechnic Institute in London. Later on he became the director and sole lessee at the Institute in 1854. It was there that he came across Dircks’ work with projected images, and came into contact with Dircks. Porter then modified Dircks’ idea to make it be easier to incorporate into theaters. In 1862, Pepper created his first working Pepper’s Ghost display.
This simpler design received welcome from theater owners. It was even used during a performance of Charles Dickens’s The Haunted Man. Though Dircks is the true father of Pepper’s Ghost, Pepper’s name is forever tied to the effect. Pepper tried to give credit to Dircks work, but Dircks allocated all financial ownership to Pepper. Both men are the father’s behind Pepper’s Ghost. One brought the concept to life through invention, while the other brought it to the stage.

How the Illusion Works

Now that we’ve covered some of the lore behind Pepper’s Ghost, let’s get into the technical portions of how this works. Below is an example of one of method you can use to make this visual illusion.

*Skip ahead to 1:26 to see how Disney uses the world’s largest Pepper’s Ghost effect in their Haunted Mansion ride*

There are two versions to making this illusion come to life through the designs of Dircks’ and Pepper. Both father’s had their own method to creating Pepper’s Ghost. Companies of today are less likely to use these older methods. Today, computer based projects and animation software are more often utilized.

Dircks’ design used crafty lighting and reflection manipulation through glass panes. An actor playing a ghost stayed out of sight of the audience by being under the stage. Hence why most theaters didn’t want to use this method and redesign the stage floor to fit an actor beneath. The actor would stand across from a glass pane placed perpendicular to the theater floor. Through light manipulation, the ghost would illuminate onto the stage. The strength of the light determined how strong the apparition appeared on stage. The placement of the glass on the stage then reflected the actor to the audience on stage. This simple technique is still used today in amusement park attractions and rides.

Pepper’s method was able to bypass the issues Dircks’ creation faced. His technique could fit into almost any existing theater venue design. To use this trick, two rooms are necessary. The audience is facing one room, unaware of a second identical room. The second room holds objects or the actor out of sight of the viewer, only to be visible once light enters the space. The main room has a plate of glass placed at a 45 degree angle. When light enters the second room, the main room dims its lights to make the effect stand out. The reflection shows the hidden objects and actor within the second room, appearing in the main room out of thin air. This method is still popular in carnival shows like Girl to Gorilla, a film you can preview below this text.

Step 1: Understanding Pepper’s Ghost and How it Works

To design a haunting hologram for Halloween, you will need a few materials to get started. The main components throughout are a pane of glass, a light source, and a space to setup your scene. I recommend starting small with a shoe box sized display to test your idea. Once you’ve tested your illusion, you can go bigger by setting up two rooms like the slider display below. Have your glass be placed 45 degrees between the two spaces. Then project your light into the second room holding your objects, while your main room remains empty. You can play around with the amount of light you want to use, as well as if you want a stationary object or live actor in the second room’s space. 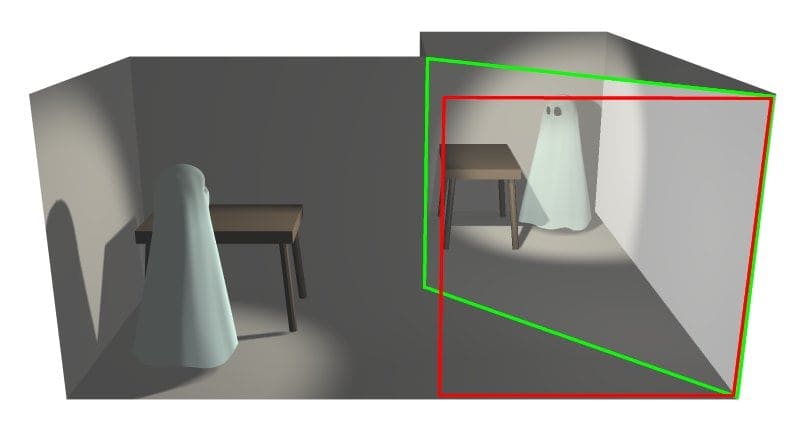 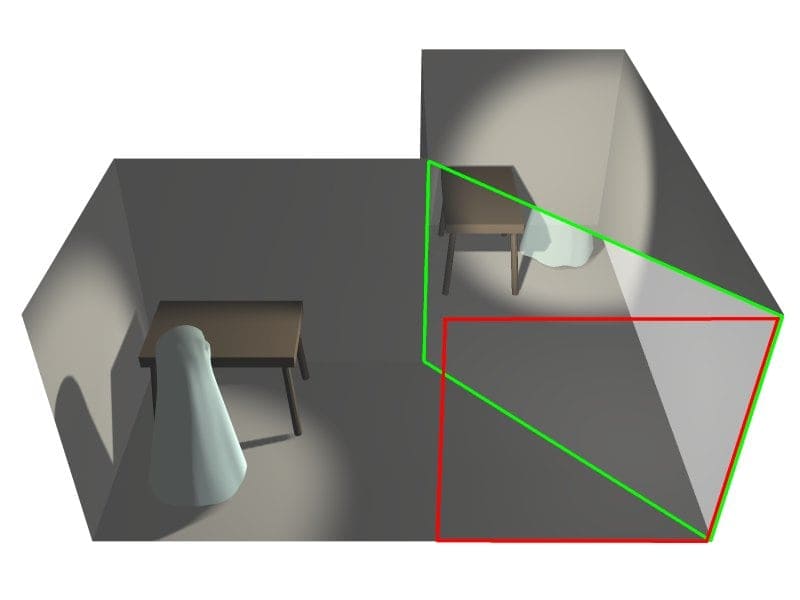 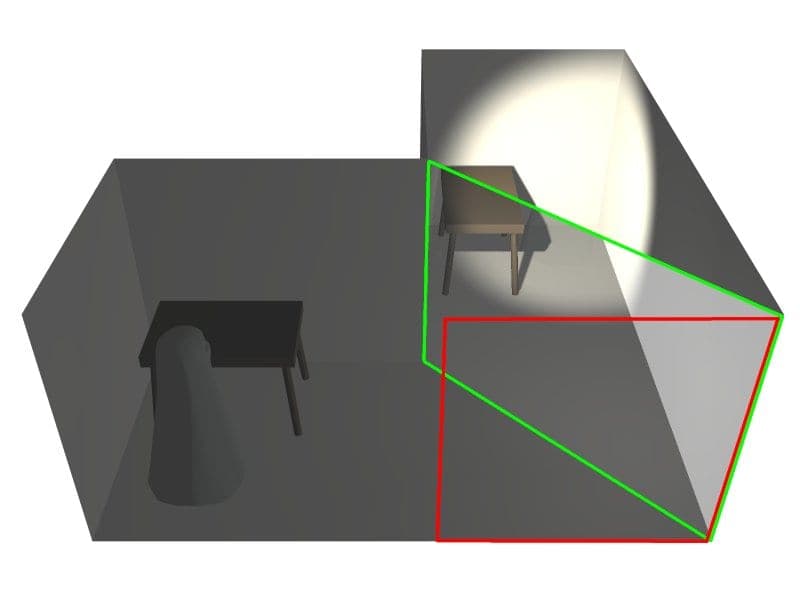 This trick can work with photos, videos, or live performances

An alternative method to making this age old illusion, is to use modern day technology. Pre-made 3D models get made on computers, smartphones and animation software. These images are then projected onto an Optical Beam Splitter on stage. Compared to the ghost like look of Pepper’s Ghost, CGI holograms are view-able from all sides. These holograms come across in a crisp, clear high definition displays. This helps make the holograms appear even more life like being fully rendered. Video projection and motion capture technology combined create CGI “digital doubles.” These digital doubles can be of celebrities, politicians, and world leaders of today and years past. Old footage of performers can be altered in animation software to bring dead celebrities back to life. Famous performances like Tupac at Coachella in 2012 and Michael Jackson at the Billboard Music Awards in 2014 make use of such technology.

Programs like p5.js allow you to create an animation that can be projected onto a glass mirror on stage, giving an even more life Pepper’s Ghost effect without a live actor, prop and large stage room being needed on standby.

You are also not limited to just using a glass mirror or Plexiglas to bring holograms into the real world. A smartphone can be all you need to summon fantastic illusions and holograms.

Pepper’s Cone is where you place a curved surface on a table to reflect the image on a 2D display. There are a few tips and tricks you will need to obtain this illusion, which can be found in the video above.

This hologram dome is similar to the Pepper’s Ghost Illusion. It creates 3D images off a 2D surface.

The looking glass is a unique interpretation of the Pepper’s Ghost effect. It creates an object inside of a piece of glass that you can interact and play with.

You can even create your own Pepper’s Ghost illusion with your smartphone.

Pepper’s Ghost is commonly made through stage illusions in theater, but it has also been shown in amusement parks, museums, television shows and movies, as well as at live concert performances. Some of today’s modern rides use computer generated images instead of real models reflected back to the audience. Here is a list of other Pepper’s Ghosts you may come across out at these locations.

The above video shows the ballroom dancing from the Twilight Zone attraction in Walt Disney World. The video gives you insider footage of the attraction, and how it works.

The above video shows a part of the Myster Lodge (Knott’s Berry Farm) where he creates the Pepper’s Ghost illusion in fire.

Ghosts of the Library (Abraham Lincoln Presidential Library and Museum)

The Harry Potter Universal Studios uses the Pepper’s Ghost Illusion that allows people to “walk through a brick wall” to reach Platform 9 3/4.

Aside from the wonders amusement parks can offer with these illusions, live concerts have really upgraded their style by bringing performers to life! They can even sometimes bring deceased performers back to life as well. Singers like Gorillaz, Tupac Shakur, Michael Jackson and Frank Zappa have all been brought to life through this technology.

The video above shows a performance that was created using the Pepper’s Ghost Illusion that allows artists who are no longer living to perform for a live audience.

In 2012, Tupac was able to perform with Snoop Dogg and Dr. Dre for a Coachella live performance. Tupac was created using the Pepper’s Ghost mirror illusion.

Michael Jackson was also able to perform for a live audience as well using the Pepper’s Ghost illusion.

The Gorillaz were able to create a Pepper’s Ghost effect, too!